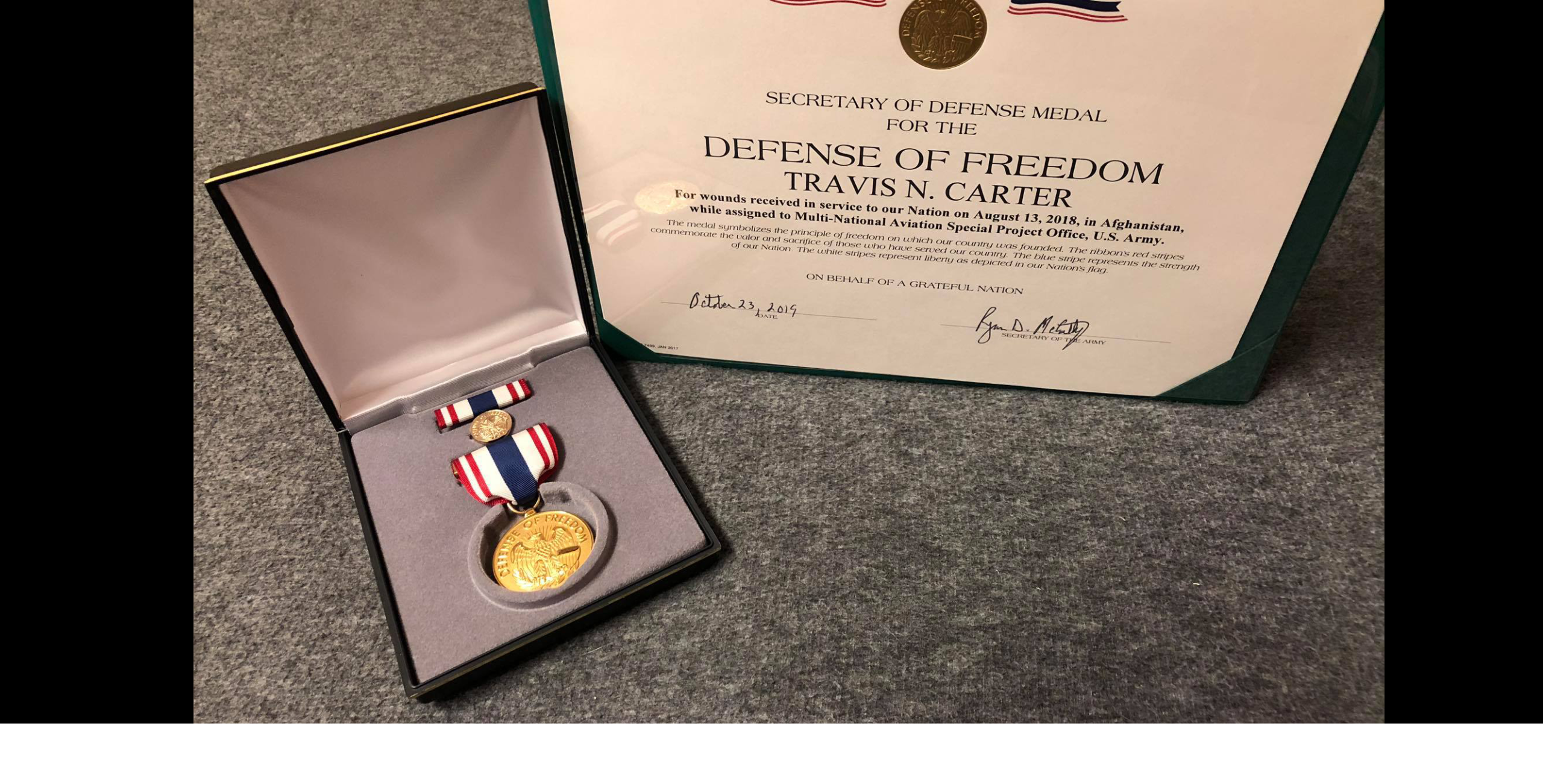 Kabul, Afghanistan – June 16, 2020 – Travis Carter, a MAG Aerospace employee and Mi-17 Crew Chief, was presented the Defense of Freedom Medal by General Austin S. Miller in Kabul, Afghanistan. The Secretary of Defense Medal for the Defense of Freedom was established to acknowledge civilian employees of the Department of Defense (DoD) who are killed or wounded in the line of duty. The medal symbolizes the extraordinary fidelity and essential service of the Department’s civilian workforce who are an integral part of DoD and who contribute to the preservation of national security.

The ceremony took place with all the Afghan Special Mission Wing (SMW) MAG and other contractor personnel present, and with representatives from the Multi-National Aviation Special Project Office (MASPO) as well as members of the United States Military in attendance.

The Event
On August 10, 2018, Travis Carter, while operating on a routine Afghan training mission flight 10 miles south of Kabul International Airport, was shot in the lower right leg by enemy small arms fire directed at the aircraft. After a quick glance and assessment of all passengers on-board, Mr. Carter and Mr. Juan Esteban, a MAG Aerospace employee and Crew Chief, realized that both Afghan crew chiefs on board were also struck with enemy fire. As the aircraft conducted evasive maneuvers, Mr. Carter, disregarding his own wounds, sprang into action immediately taking Afghan student, SGT Nasiri, and placing a tourniquet on his severely bleeding leg. Simultaneously, Mr. Esteban, unable to quickly find Afghan student SGT Intezay’s tourniquet, pulled out his pocketknife, cut a sleeve off of SGT Intezay’s shirt, and used it as a tourniquet in order to stop the bleeding from Intezay’s upper right arm. Mr. Gregory Earnest, the MAG Aerospace Pilot in Command, instantly sent a radio transmission informing Kabul Tower of the events that took place and informed the Tower that they were enroute to the U.S. Kabul MEDEVAC Ramp. Once Mr. Carter confirmed the tourniquet was effective on SGT Nasiri and that he was in stable condition, he took his own tourniquet and tended to his own severely bleeding wound. Both Mr. Esteban and Mr. Carter continued to relay positive messages and words of encouragement to both Afghan students until they arrived at the U.S. Kabul MEDEVAC Ramp Upon entering the medical facility, Mr. Carter was screened and immediately sent to the operating room to have several pieces of shrapnel removed from his leg. Mr. Carter and Mr. Esteban’s quick reaction, direction, and dedication to the safety and well-being of their students ensured both Afghan crewmembers would lose minimal blood; ultimately contributing to no loss of life during this event.

Receiving the Defense of Freedom Medal is a great honor that often comes at a harrowing cost. MAG employees understand the significant role they have in making the world smaller and safer, and strive to ensure they perform to the highest standards of professionalism – as demonstrated by Mr. Carter.

To learn more about the Defense of Freedom Medal, click here.

About MAG Aerospace
MAG Aerospace, headquartered in Fairfax, Virginia, is a leader in providing and enabling technology to deliver real-time situational understanding and help its customers make the world smaller and safer. MAG delivers full spectrum C5ISR Services (integration, operations, training, and technical services) and other specialty aviation to federal, international, civilian, and commercial customers around the world. MAG’s team of 1,700+ C5ISR professionals deliver C5ISR and other technology solutions on six continents in support of its customers’ missions. For more information on MAG Aerospace, please visit www.magaero.com.